For whatever reason I never published this race report from 2018. It was my first 100-mile race and as you’ll see I had some issues. I left the report intact and only added for clarification.

Barry Roubaix is a ten-year-old (sic) gravel road race through the rolling unpaved countryside of Barry County, Michigan. Though it derives its name from the flat cobbled French classic Paris-Roubaix, this version is rolling—think 100-vertical-foot 7-to-8%-ers over-and-over with some fast flatter sections to keep things together. The inaugural 100-mile race combines the most shall-we-say rustic parts of the main event 62-mile ‘Killer’ and added a few miles of state forest Jeep trails and seasonals that ended up being the major break point in the race. 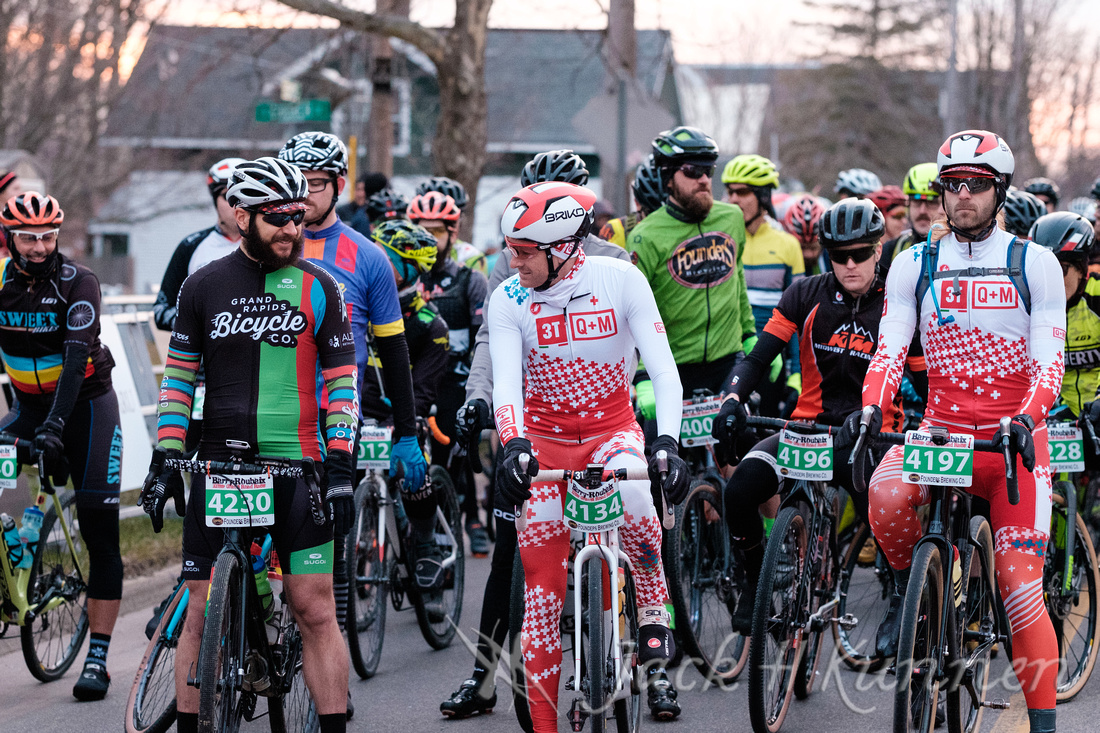 We lined up at around 6:40am to hear the immaculately-bearded Matt Acker feed us directions. As seems to be the case with most [ultra-]endurance events, there was a nervous bubbliness to the prerace dialogue and no talk of expectations (an unwritten rule of amateur cycling [however ironic given the sheer insignificance of the sport] is that no one will tell you how good they think they’ll do just before the race). Most of this must be out of superstitious fear that saying the thing aloud will make it untrue—like the sportscaster’s kiss-of-death—but with more self-deprecation.

I’m not immune to meaningless material merits so I’ll let you know I wanted to go Top 10. I was coming off a recovery week and my biggest offseason base to date so the legs felt fresh and as we hit the first gravel incline I went to the front and stayed with the lead group till the notorious Sager Road, but from the OPPOSITE DIRECTION. 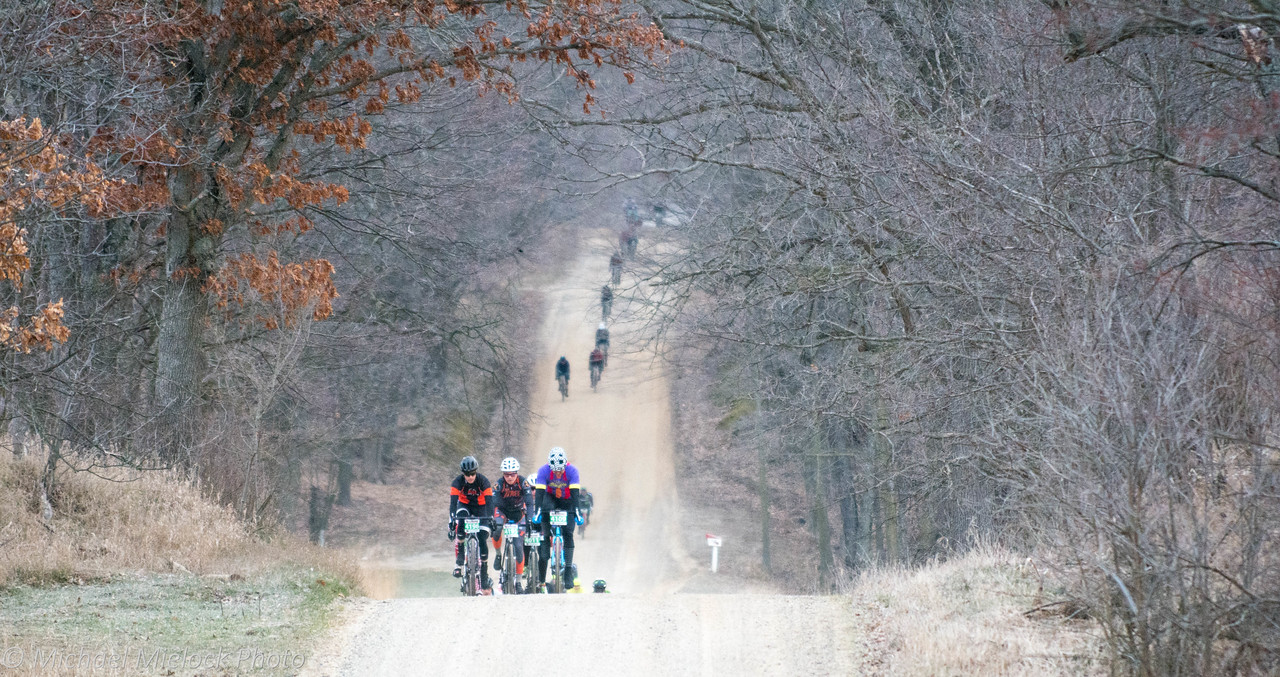 Sager Canyon is a series of increasingly larger and sandier hills punctuated by Jeep whoops filled with water where the only passable lines are plateaus of soft mud between deep ravines of muck. So naturally I was on the front of the pack when we hit the road, me and another dude were side-by-side scanning every available line as we approached the first pools. There was no line left (I was on the left side) but there was a rough off-camber line on the shoulder to the right except the guy next to me wanted to take a middle line and of course we arrived at one of these mucky plateaus at the exact same time and I was forced off the side where my wheel immediately sunk into the muddy sidewall and I was face-first into the water before you could say ‘whoopsie’.

It must’ve been in the low 40’s when we started—so let me tell you—that water was cold. My whole left side, including my shoe, went under. Fuck. Stay calm. Assess the bike situation. Chain is dropped. GPS mount broken at sharp knife-like angle and GPS half submerged in the water like a message-in-a-bottle. Gels, gummies, and water bottles ejected. Power meter most definitely shelled. Sunglasses broken. Whole race now passed. Gather yourself. Breathe.

Luckily for me, shortly after the massive puddles a sandy climb ensued and because I had slowed the field down in my herculean face-plant everyone was off their bikes and running up the sand dune. Being filled with rage-fueled adrenaline I ran up the climb faster than anyone and was within a group of 6 or 7 on the chase when we hit the paved Gun Lake Rd a few minutes later. The course being mostly unmarked, a GPS was necessary and because mine was in my back pocket I couldn’t afford to make a move on the group. But everyone seemed to think there were four up the road, meaning the six or seven of us were fighting for the last podium spot. Nope.

I dropped my old aluminum Jamis frankenbike into the 28-tooth as we turned onto the next two-track segment and treated it like a mountain bike KOM attempt. By the end of the Hart Trail (in 2022 you’ll do this segment backwards) I was in 4th and closing fast on 3rd. It took me 19 minutes to catch Mike Simonson & Mike Bernhard but I joined the leaders just before we hit the steep sandy Deep Lake climb. With my gearing I was able to take it easy and still had to wait for them at the top of the climb (the 2x lives another day!). This gave me some hope but we were only 25 miles in with Sager Road and a few other steep inclines left plus another 75 miles I had never seen nor knew nothing about.

Mike B. was on a singlespeed and Mike S. was on one of those new aero gravel bikes the cool kids keep hyping. I felt good but I was wet and cold; caked in mud; all my bars, gels, gummies missing or covered in grit; also without any directions, power data, speed, time, or distance. I was also drinking a new high-carb drink blend that within a few short miles I would discover made my stomach upset in a sort of I-might-shit-my-pants kind-of-way.

So anyways, there I am at the front of my first gravel race, 75 miles to go, one gel and half a sand-filled Clif bar down the hatch and nothing left but stomach-emptying liquid in my bottles. The three of us drifted along, flew up Sager Rd in an unusually efficient manner for Barry, and traded turns to the foot of the Wall where it we learned Mike S. had decided to crush our hopes of victory. Without having any power data I put my head down and just tried to minimized the gap with Mike B. as Mike S. had distanced us both by a fateful amount. I managed to grab back onto Mike B.’s wheel and we proceeded to pull each other along the course, Mike taking any uphill and myself trying to match Mike’s high cadence on downhills where he spun out. I was feeling good which was nice because if I got dropped alone I would have to wait for the next group for directions. 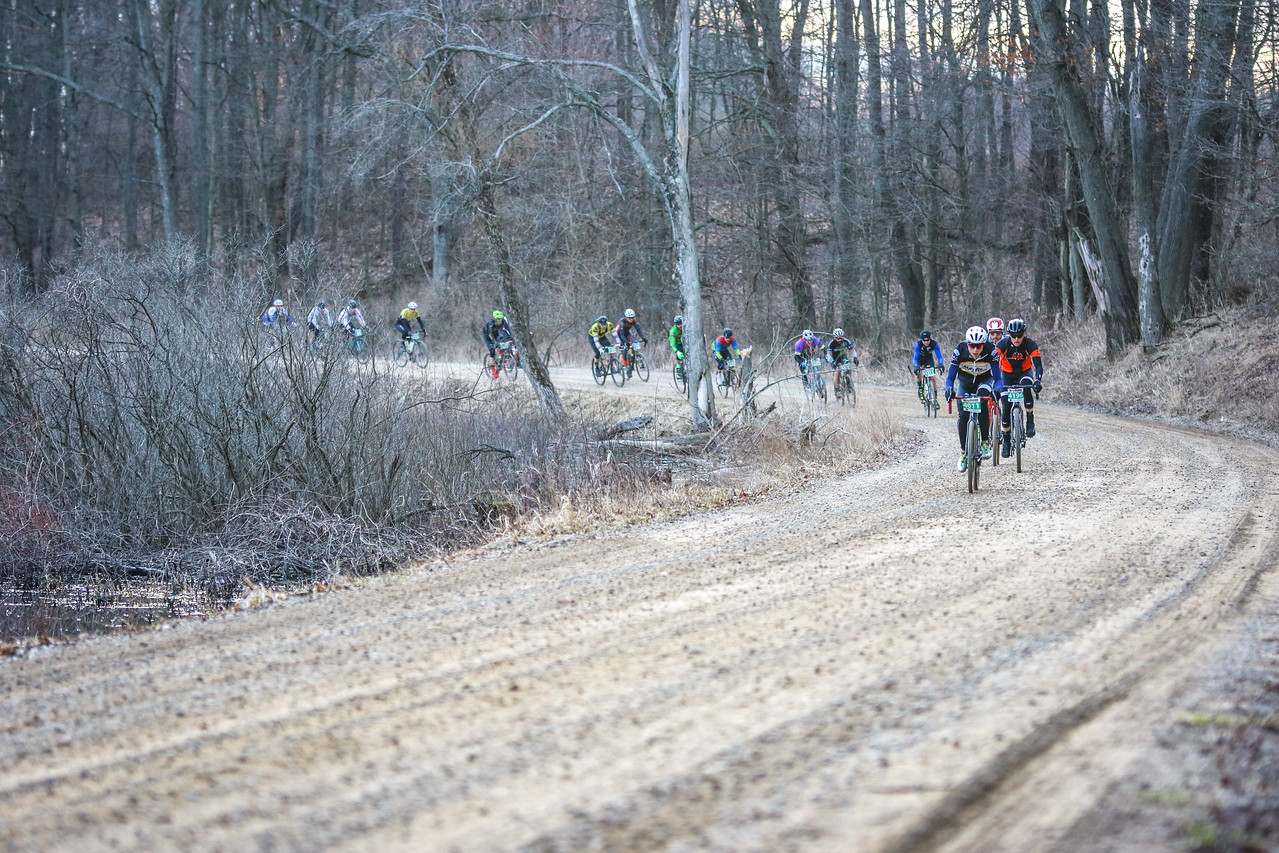 I snagged half a banana from the first aid station we hit, not knowing that would be the last thing I ate all day. Mike and I spun and spun, shot the shit, I took a piss on a long downhill, eventually we saw three chasers coming a few rollers back. Knowing we’d be caught we both put in some easy pulls and waited for the catch. Al Wheeler, Glen Shaw, and some PA guy came upon us at a moderate, friendly pace with no attacks. We cruised together on some flattish pavement for a few miles and eventually the pace picked up. It was clear that Glen and I were not feeling great as we quickly got distanced up the first pitch. We managed to fight back on but as soon as the pace changed again him and I were out of it. I was in the early throughs of one-hell-of-a bonk, the darkness just starting to set in in the periphery of my vision, legs churning out one speed at a dwindling cadence, standing every couple strokes to feed some power to the legs, nothing to drink or eat unless I wanted to roll the dice on vom-bombing some drink formula out my ass. Glen gapped me but luckily we had joined the 22/36/62 course so there was signage and other racers. Up one of the next hills I couldn’t believe my luck as Glen was off his bike with either cramps or nausea. I struggled onto the paved home stretch back into town, holding back my own sickness and cramps, giving it everything I had for the last podium place. Bless Glen because he caught back up and wasted no time attacking which I’m sure at this point in the race looked more like an electric wheelchair overtaking another Amigo in the frozen foods aisle of Family Fare. I rolled home in 6th and didn’t even think about a beer for a couple hours.

NOTE: I’m finishing this race report almost five years after the event so these takeaways have the added value of perspective with the limitation of a memory neural network that has since warmed to quite a few cold ones

This is one of those you-have-to-learn-it-the-hard-way lessons that unfortunately most do. Drink mixes, tire choice, GPS devices, sunglasses, saddles, the list goes on and on of things not to test for the first time on race day. Especially your first 100-miler.

It’s impossible to ride an entire ultra course before every race but if there are any ‘technical’ sections it definitely behooves one to take a gander or at least know exactly when you’ll hit the section and if there’ll be much traffic alongside to potentially limit line choice.

You’re gonna get them. Chill out. Or be the guy who pulls the pack the first ten miles and takes a drink in the pond water. Or don’t. Sit in, be smart, feel the group out. Let others close the gaps.

In these long races where the head of the race is somewhere around 80-85% intensity for the first half it’s possible to come back from things like flats and crashes. And in the second half of the race when all those earlier misgivings start to add up there’s no telling what kind of head of steam a confident rider can create. Looking at you Glen, you Dirty Bastard™!

With pack dynamics, closed roads, neutral support, and a finish line beer tent, it’s hard not to love these events. Enjoy it.

When I picture gravel, I picture those twisting Barry Co roads. It’s a phenomenal course that rewards punchy riders and those that make moves. There’s a reason it’s one of the largest races in the country and people spend all winter dreaming of what tires they’ll run and then changing at the last minute.